This waterpark has been demolished and a new shopping center called Mogan Mall is now being built in it's place.

Where did it all go wrong at Puerto Rico waterpark? With high prices, an impending recession plus the competition of Aqualand in Maspalomas – the Atlantida waterpark in Puerto Rico closed down. Back in 2009 a sign was put on the gates saying ‘Closed for Holidays' – that sign is still there today in 2016. 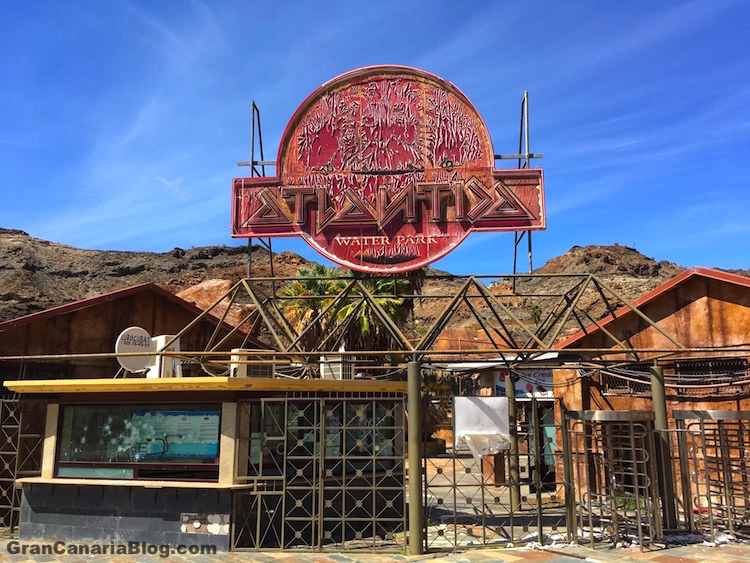 Back when Spain were still using pesetas, the waterpark in Puerto Rico was thriving with locals and tourists alike. It was before the Atlantida theme, but the attractions were very much the same, making it a nice change from the beach and close proximity. Although not boasting as many slides as Aqualand Maspalomas (then called Aquasur) or Ocean Park in Maspalomas (now closed down), the prices were good for what was on offer at around 1,200 pesetas/7€ per adult.

Now the closest waterpark to Puerto Rico is the Lago Oasis in nearby Taurito. In it's latter years, entry prices for Puerto Rico waterpark more than doubled with a child's ticket costing 15,50€ and so people wanted more for their money, going to the larger of the waterparks Aqualand. 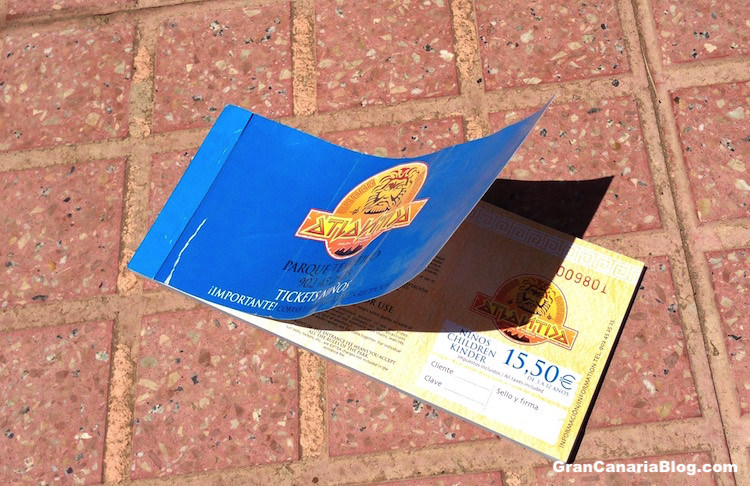 And so, Atlantida closed, with no explanation and now looking worse for wear. The slides and tiki hut roofs are beyond repair, the ticket office ransacked. Every few months there are rumours about somebody wanting to buy it and fix it back up, which I hoped was true because it was a great nearby excursion for Puerto Rico.

June 2018 Update: Please now see our new post about the shopping center called Mogan Mall which is being built on the waterpark site. Since we last updated, the last pieces of the waterpark have been demolished, including the white wall that surrounded the park. 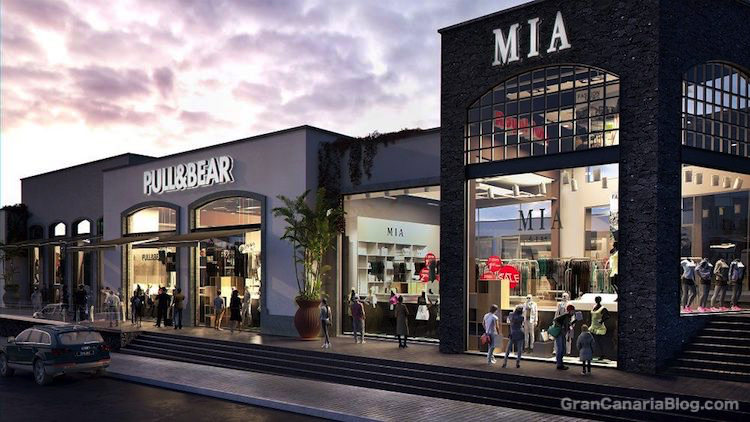 It's been some time since there has been anything happening at the waterpark site. We took a walk round the old car park and peeked through one of the windows where we could see a mess of bottles in the old bar area. 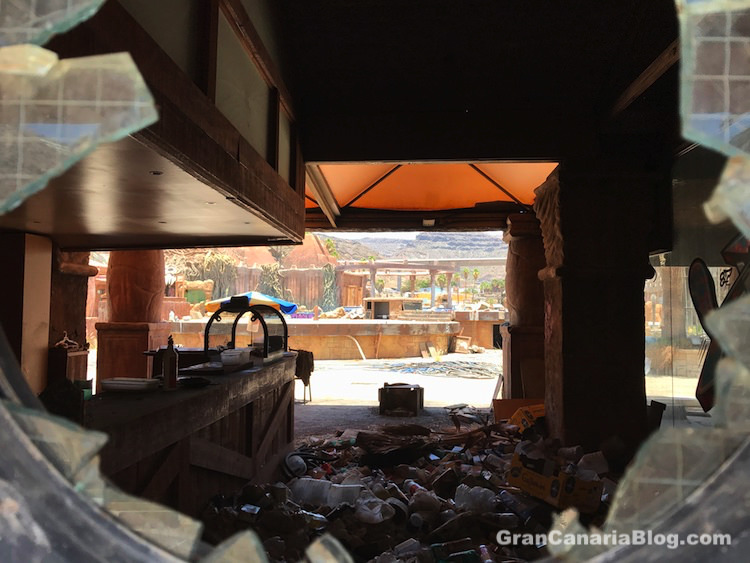 There is an umbrella and chair set up so this could be a security guard post. There is also a burnt out car on the car park. In general the place is looking more overgrown than the last time we took a look round. 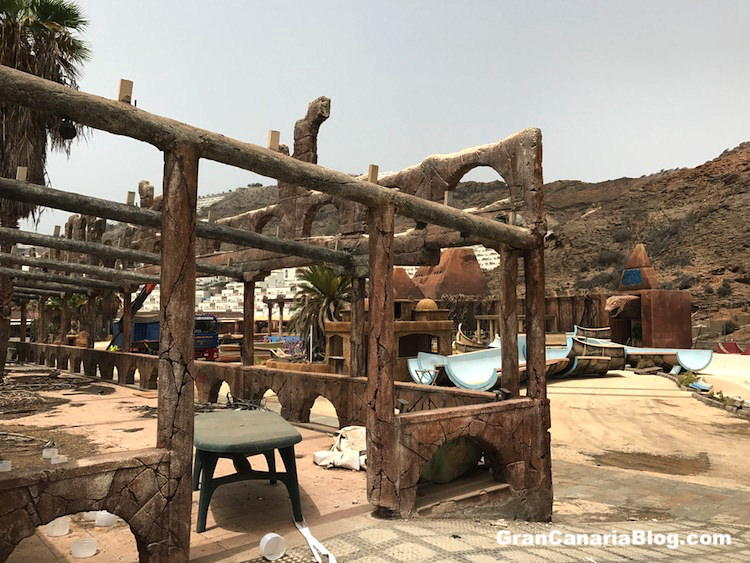 Some good news, on the 8th August there was a truck with a crane and about 5 workers, who were lifting out portions of slides. We think things will move along a bit quicker in the next fews months as new buildings and competitors such as the new Mercadona are popping up in the same area.

We have movement! Today I noticed a large crane inside Puerto Rico Waterpark, so I took some fresh photos to give you all an update. The curly slide which you can see in the photo near the top of this article, has now been demolished as have several other slides. The crane was lifting up portions of the slides and bringing them down towards the gates so they can be removed. 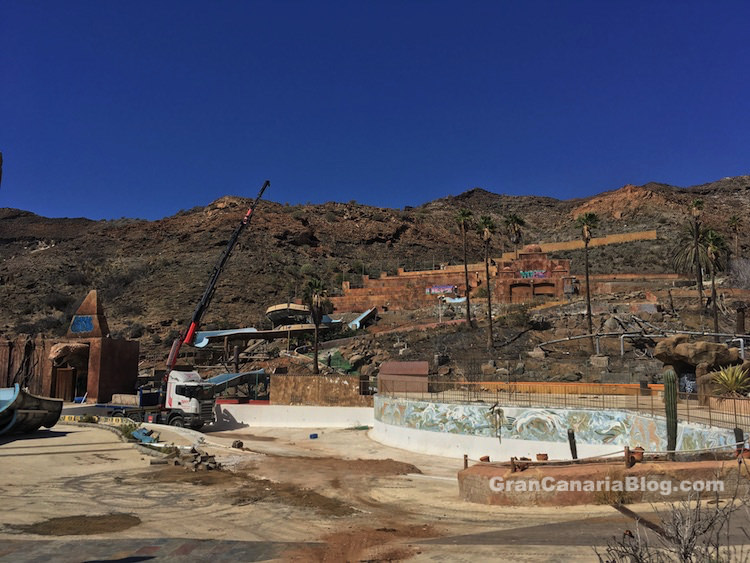 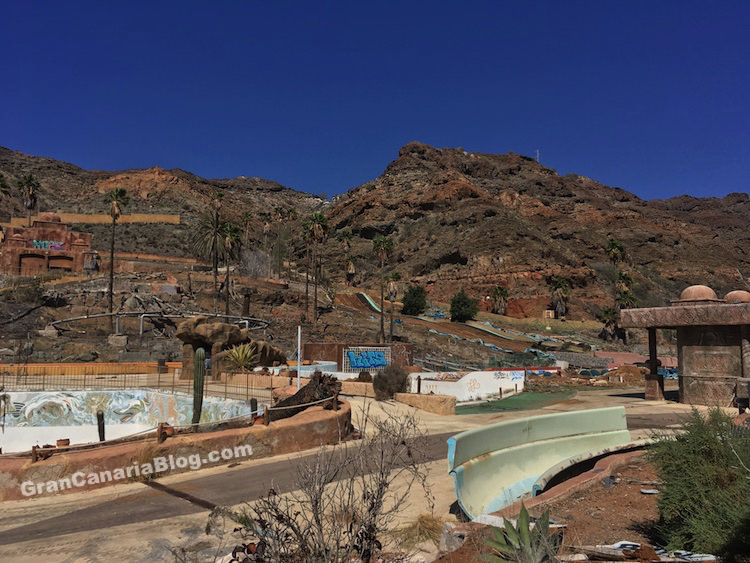 It's been a while since there has been any movement on this site, I'm wondering if the construction of the new Mercadona supermarket in Motor Grande has had any impact since there is supposed to be a new Hiperdino Supermarket in this new shopping center. Only time will tell, but there is a LOT of work to be done on this site, they should probably hire some more cranes. 🙂 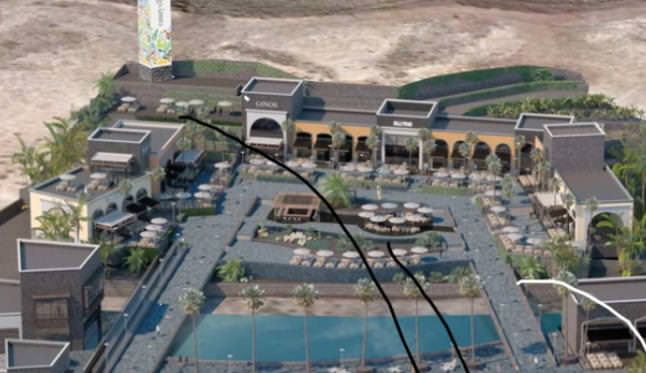 We have an update on the new Puerto Rico Shopping Center! Work is due to begin on the old Puerto Rico waterpark land in September 2016 after the Summer season.

Shops
Inditex group are planning to open clothes shops Zara and Stradivarius in the new shopping center. Funde Grube and Hiperdino supermarket are also part of the soon to be shopping area.

Restaurants
According to the mock up photos, this is going to be an outdoor shopping center with a food and drink area in the middle. The investors are also interested in some fast food establishments. McDonalds Puerto Rico is considering moving their existing restaurant to the new location.

The plans for the new addition to the resort are moving along quicker than usual due to falling in with the modernisation plan of Mogán. The venture is backed 60% by Fund Grube owners Ghirdari and Manmohan Chhabria, 20% Amid Achi and 20% Javier Puga.

The latest news we have is that entreprenuer Amid Achi, owner of El Tablero Shopping Center, has plans to demolish Puerto Rico waterpark. The 26 million euro investment will turn the land into a brand new Shopping Center, beginning work in 2016. Javier Puga, another of the investors, is the CEO of Hiperdino, so I'm guessing we could have a large Hiperdino Supermarket pop up somewhere in the plans. So far there hasn't been any movement in the area, but I will keep you posted. 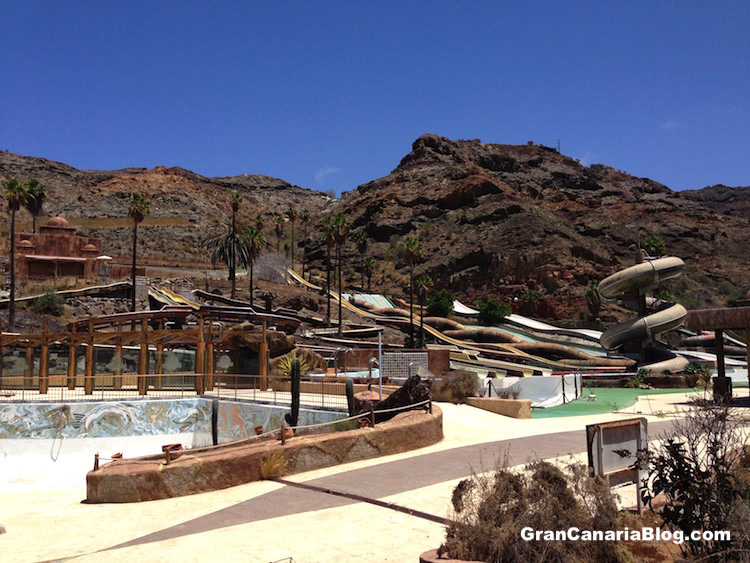 If you had the millions, what would you build in place of Puerto Rico Waterpark? Let me know in the comments below this post. You can use Facebook login to comment. 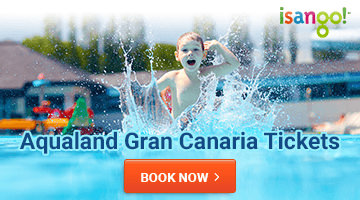 That would have been ideal. It’s just what Puerto Rico needs.

That would have been ideal. It’s just what Puerto Rico needs.

October 2017 and still no major demolition going on. Some pieces of slides have been knocked down and removed but it’s been quiet lately.

October 2017 and still no major demolition going on. Some pieces of slides have been knocked down and removed but it’s been quiet lately.

Gran Canaria currently has certain measures and restrictions in place due to the COVID-19 pandemic. To stay updated please check the Coronavirus in Gran Canaria post.
wpDiscuz