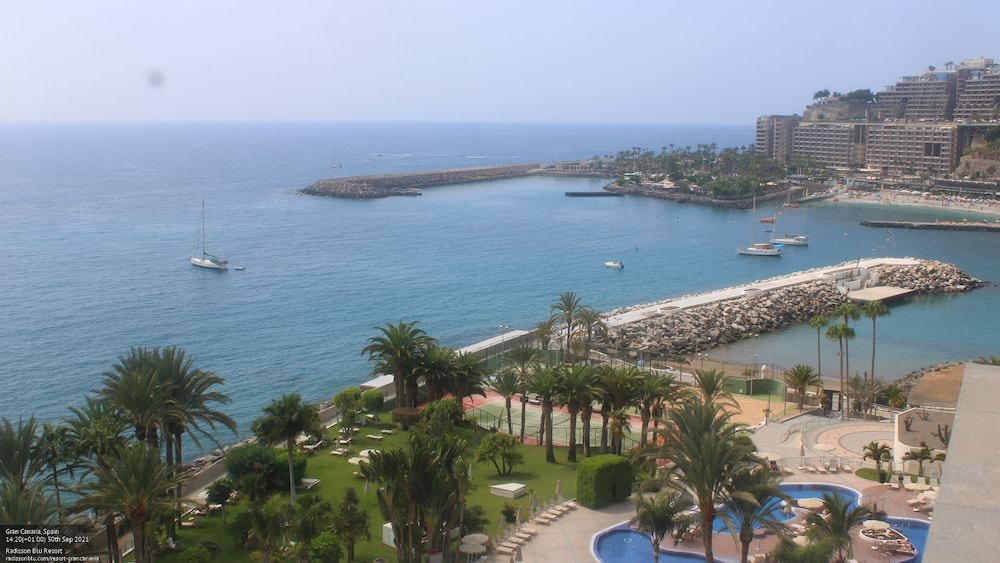 Here we are on the last day of the month and it still feels like Summer in Gran Canaria. Daytime temperatures the last few weeks have been around 30ºC degrees and evenings are still feeling warm.

We do have some calima clouds around at the moment which accounts for the haze. As we head into October things are going to heat up even more with a yellow heatwave warning for temps up to 36ºC degrees!

What a beautiful start to the month! We are still enjoying Summer time here in Gran Canaria so temperatures are pretty much the same as August in the low 30's. This video was taken today at Arguineguin's Las Marañuelas beach.

A calima blew over the islands last night and today the sky is VERY hazy. The sun is still shining through the dusty sky and the sun is hot with temperatures about 33ºC degrees. It feels like Summer again! This isn't due to last long though and the forecasts show that we may even have some rain on the island at the beginning of October!

Wow! Where did the month go? Sunny September has flown by and October is right around the corner. It officially turned Autumn a few days ago but September and most of October are like extensions of the Summer in Gran Canaria.

Today I took a short walk in Patalavaca, where there were quite a few people on the beach topping up their tan on Don Paco beach as the waves lapped calmly onto the sand.

It's a beautiful day, with blue skies and hot sunshine with highs of 31ºC degrees. The evening's are much more pleasant now and it's easier to sleep compared with the uncomfortable Summer nights. I personally have put the duvet back on my bed (it's a very thin Summer one from IKEA) and don't need the fan on at night to sleep.

Wow, where did that rain come from? It's been a rainy, grey day in Puerto Rico but the temperatures have kept a steady 24ºC degrees. The rain was on and off so we decided to take a walk in the Agua de la Perra area of Puerto Rico. We parked up by Marina Suites and walked up past Las Olas Shopping Center and through the park.

At this point it was only spitting but when we got to the top past Tennis Island it started raining cats and dogs. On the way back down the stairs near the entrance to Marina Bay View we took this photo of the harbour below.

We then drove round to Puerto Rico Shopping Center and enjoyed the Menú del día at Coco's. In fact the Shopping Center was very busy, obviously it wasn't the best day to be on the beach, so people were shopping, having a bite to eat, and a few afternoon drinks.

Right now at 20:00h it's thundering and the sky is stormy looking. It will probably rain on and off through the night but the forecast for tomorrow is sunshine.

Happy first of September and the beginning of Autumn in Gran Canaria. The sky is a beautiful cerulean blue and we will probably see highs of about 30ºC degrees today in the south of the island. Take a look at this webcam still from Amadores Beach in Puerto Rico taken just before 13:00h today.

Welcome to the first day of September 2015 in Gran Canaria!

We have beautiful blue skies today accompanied by high humidity and a very welcome breeze. Temperatures are in the low 30s and it's still Summer here! The sea is pretty choppy today, especially in San Agustin where they had the red flags out on the beach, which means no swimming.

The swimming pool at IFA Beach Hotel looked most tempting! This is an adults only hotel and has wonderful palm trees decorating the pool area. It's right near the natural dark sand beach of San Agustin.

It was fun to walk along the promenade and feel the cool spray of the sea as it splashed onto the rocks.

AEMET have issued a yellow weather warning for storms in the Islas Orientales namely Lanzarote, Fuerteventura and Gran Canaria. The electrical storm is sweeping over from the East and heavy rain has already occurred in Lanzarote and Fuerteventura so far.

The warning is in place until 23:00h this evening. There was rain early this afternoon in Las Palmas. Despite the warning for rain and storms, the air is still very humid and the sunshine has been out for most of the day in south Gran Canaria.

We've already had a rain warning this week, but AEMET have put another in place for Thursday 27th September.

The yellow weather warning for heavy rain is for the whole of Gran Canaria and a high winds warning for the mountainous zones of the island with wind speeds up to 70 km/h. The other Canary Islands are also on warning.

It's a very rare cloudy day in Puerto Rico today, even with a few dark clouds the temperatures are still around 25ºC degrees, making it a great day to explore the resort, souvenir shop or have a nice lunch.

There has been much confusion as to whether Tropical Storm Nadine, which is currently in the Atlantic, will affect the Canary Islands. She has been circling nearby and spaghetti models showed she would originally pass the Canaries and head north.

AEMET have since put out a weather warning for Gran Canaria, Fuerteventura and Lanzarote for heavy rain for Sunday 23rd September and Monday 24th, which includes Tenerife. So far it seems the tail end of the tropical storm will give us some much needed rain and maybe some big waves.

This evening on Amadores Beach in Puerto Rico, we were blessed with a wonderful September sunset. There were a few clouds which added character, plus the silhouettes of the tall palm trees from the beach.

Today's photo was taken this morning, overlooking the wonderful Puerto Rico beach. It's a great view from up here and a beautiful September day.

Would you believe it’s almost October? Not if the week of weather in Puerto Rico is anything to go by. The sun has been out in full force today, with the brightest blue skies.

Daytime temperatures are still around 30ºC degrees. What Autumn?

After a beautiful day of blue skies in Puerto Rico, the early evening saw a fresh breeze, excellent for winding down on the balcony with a cold drink.

At one point, the temperature clock in Arguineguin was at 32ºC degrees this afternoon!

There were many wispy cirrus clouds around just before dark and we could see some rain coming in tomorrow due to the tail end of tropical storm Ophelia as she heads to the USA.

So far the temperatures still look good and there are no weather warnings, only possibility of isolated storms.

AEMET have issued a yellow weather warning for a heatwave this week beginning Wednesday 7th September. Temperatures are expected to reach up to 35ºC degrees in the shade in Gran Canaria.

The heatwave coincides with the festival of Virgen del Pino and there is a maximum alert for fires Gran Canaria and Tenerife, so it’s important for those walking to Teror to take precautions.

It’s a beautiful Saturday afternoon in Puerto Rico and not too late to go to the beach. There is a nice breeze coming off the ocean, which makes it more comfortable in the high temperatures we still have of around 30ºC degrees.

There is still a chance of rain tomorrow apparently? Stay tuned.

September is finally here; after a long month of heatwaves in August. Temperatures are still high in the low 30ºC’s but there is more of a breeze now and not a cloud in the sky! We went to explore and found a viewpoint with an amazing view of Aqualand Maspalomas. Definitely the place to be on a hot day.

The Puerto Rico webcam that looks over the harbour is showing 31.5ºC degrees at 17:33h so that should give you an idea of how hot it can be in September.

This is a typical September morning on Amadores Beach in Puerto Rico. The sky is hazy, it's hot and there are people taking a morning swim after breakfast.

After hours of heavy rain last nite, I would love to say today is bright and sunny but as I wake I’m greeted by a big, grey cloud that covers the island, a bit like the space ship in the movie Independence Day.

It looks like the weather forecast was right up to now.

UPDATE: 18:52h
The sun did break through the clouds but it isn’t what I would have called a lovely sunny day. It feels like we have a calima and that would explain why there is sand everywhere after last nights rain.

I was woken this morning by a big gust of wind. The sky has been grey and gloomy all day in the south, with rain in Arguineguin, Playa del Ingles and Vecindario.

Looking at the forecast for the south there is chance of rain for the next 5 or 6 days, although it could change if the wind continues to blow the clouds away. It feels like a calima in a strange way, it’s not cold but very gusty at times.

Unfortunately we had stormy rain and now I have just woken up to see bright sunny skies. As usual the rainy weather doesn’t last that long in Canaries.

I did notice the island of La Palma had a weather warning of very heavy rain at the same time we had our storm. According to the forecast it looks like sunny skies until next week when we could get bit more rain.

Last night we had a storm and its been really cloudy today with rain on and off. The sky still looked full of rain earlier and we will probably have some more during the night.

Yesterday didn’t even start out like this and we saw those infamous blobs of rain. My report is coming from Arguineguin at the moment and although it doesn’t feel cold it’s definitely a nice change to being too hot all the time.

There is actually 20% chance of rain today here in the municipality of Mogan, but who knows?